A bar to reenlist is a procedure which is used to deny reenlistment to Soldiers whose immediate separation underadministrative procedures is not warranted, but whose reentry into or service beyond ETS with the Active Army is not in the best interest of the military service. The following are guidelines for use of Bar to Reenlisting procedures:

b. A Bar to Reenlistment will not be initiated solely because a soldier refuses to reenlist.

c. Bar to Reenlistment procedures will not be used instead of trial by court-martial, nonjudicial punishment, or otheradministrative action.

d. The fact that disciplinary or administrative action not resulting in separation has been previously taken does not preclude initiation of Bar to Reenlistment if such action is deemed appropriate. When a soldier has had a completed chapter action and subsequently is recommended for retention, any documents used in that chapter action may be used in a subsequent bar action.

e. The fact that a soldier may be issued an honorable or general discharge for the current period of service does not prevent initiation of a Bar to Reenlistment to deny the soldier later service in the Active Army.

f. The fact that a soldier may have served honorably for a number of years is considered in the evaluation of his or her service; however, it does not prohibit the initiation of Bar to Reenlistment procedures if such action is deemed appropriate.

g. A Bar to Reenlistment will not be initiated for soldiers with an approved retirement.

h. A Bar to Reenlistment will not be initiated on soldiers serving on indefinite reenlistments. Denial of continued service on these soldiers will be accomplished IAW applicable provisions of AR 635-200 and other regulations as appropriate.

i. An approved local bar to reenlistment will take precedence over the QMP. If the bar is removed, the soldier will beprocessed under QMP as prescribed in AR 635-200. 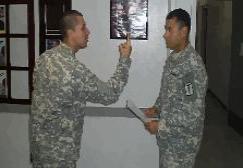 Are your Soldiers out of control?

As Non Commissioned Officers, it is our responsibility to counsel our Soldiers on a monthly basis and when they fail to follow instructions.